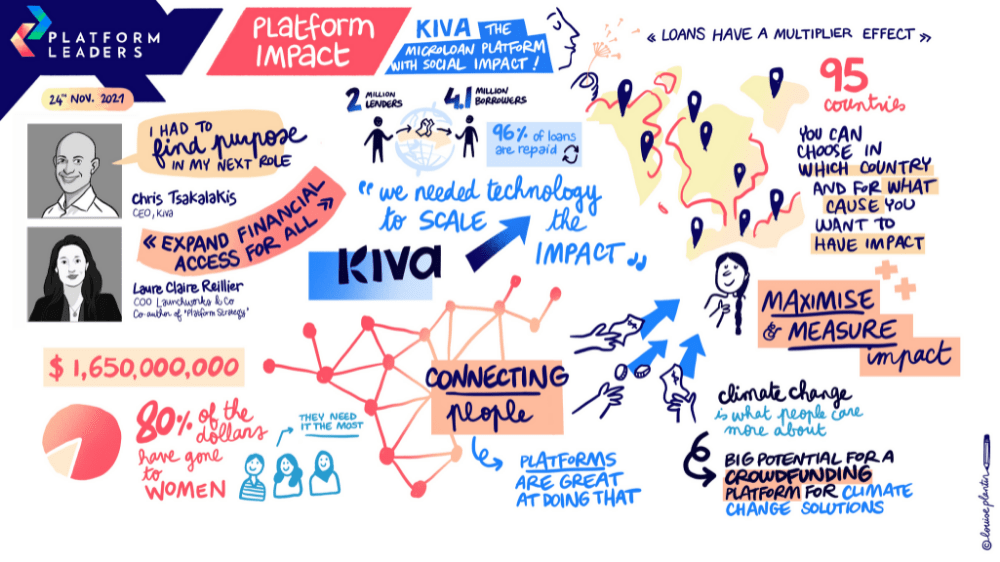 Founded in 2005, Kiva is a global not-for-profit and crowdfunding platform. Its mission is to expand financial access for all, and the numbers are impressive. In the past 15 years, Kiva has enabled two million lenders to mobilise $1.65B in loans for over four million entrepreneurs in 95 countries.

Chris Tsakalakis has joined Kiva as CEO after having worked in leadership positions at eBay, StubHub, and Vivino. As one of the most accomplished platform leaders in Silicon Valley, Chris brings a wealth of experience about how platforms can enable value creation for their participants. In conversation with Platform Leaders’ Co-chair Laure Claire Reillier, Chris shares his vision for Kiva and his hopes for the future.

Kiva has a clear mission: to help the 1.7 billion people globally who don’t have access to financial services.

Chris came to Kiva in 2021. “I really wanted my next job to be one with […] an organization that would help improve people’s lives. That was my number one criteria: finding purpose in the next role that I took on. The number two was working with people that I respect and I could learn from. And I found that in the board at Kiva.”

Kiva has an impressive board that includes tech visionaries Reid Hoffman, one of the co-founders of LinkedIn, and Andre Haddad, the CEO of Turo, to name just a few. This strong background in tech allows Kiva to operate differently.

Unlike many traditional non-profit organisations, Kiva is run as a tech-forward company.
“Technology is what we use to scale our impact,” says Chris. “It’s really hard to connect two million lenders to four million borrowers if you do it with pencil and paper. You need technology to do that and to scale.”

Kiva leverages technology at key points in the microfinancing process. This includes:
● collecting funding for loans
● transmitting money to borrowers
● estimating impact and ensuring that loans are going to the most vulnerable people

By providing loans to the individual people who need them most, Kiva offers lenders the chance to make meaningful contributions. According to Chris, “lenders want to have a social impact.” Through Kiva, lenders provide funding loaned at 0% interest.

“The loans are repaid at a rate of about 96% historically, but it’s not 100%. So, effectively you’re getting a slightly negative interest rate. It’s not a for-profit loan, but it’s also not a donation,” says Chris. “If you put in $100 today, that money comes back eventually, and then you can re-lend it. Over the course of a few years, that $100 can fund $600 worth of loans. So, there’s a multiplier effect, and that’s one way to maximise social impact.”

Most of the borrowers are entrepreneurs. Kiva isn’t limited by industry, although agriculture is a major sector for borrowers. Chris is personally close with sustainability initiatives being realised through Kiva: “There’s a very active group focused on climate change and sustainability […and] there’s a lot of focus on empowering women.”

Making a difference where it’s most needed

Indeed, there is a whole team focused on measuring impact. “Unlike a lot of marketplaces, [Kiva] is not a free-for-all. We actually have a group within Kiva that focuses on impact, meaning the improvement in lives,” Chris explains. “We look for those loans that would have the biggest positive impact on people’s lives and improve their financial health.”

This approach means that Kiva can help to address underlying factors that contribute to financial inequality, such as geography and gender. To date, 80% of the dollars lent have gone to women, and upwards of 94% of the loans have gone to borrowers in developing countries.

“[Women] need it the most,” Chris says emphatically. “It’s the women who are under-served and those are the people who we’re trying to serve.”

Microfinancing programs have many operational models, but Chris believes that digital platforms can be particularly effective. “Platforms do a good job of aggregating demand and aggregating supply, bringing it all to one place,” he says. And in Chris’ view, there is a general lack of readily available options for individuals to put their money to good use: “There are some impact investment funds, but they’re pretty limited and there aren’t that many available to consumers.”

In contrast, Chris says, “Kiva is able to aggregate lots of borrowers who we vet onto the platform, and then also aggregate lots of lenders. […] Having it all in one place where other people can access it allows for that free-flow of capital from lender to borrower.”

Despite Kiva’s success, the scope of their mission isn’t shrinking. “We’re trying to help the 1.7 billion people in the world who are un-banked. To date, we’ve funded loans to four million borrowers.” Chris acknowledges: “The challenge is still massive.”

To help grow Kiva and move closer to their goal of global financial inclusion, the platform has developed two significant initiatives in the past few years:
1. Kiva Capital, their corporate marketplace. “Kiva Capital is a set of impact investment funds where the money comes in from corporations and foundations, and then that money goes out to fund micro-loans around the world for specific purposes,” says Chris.
2. Kiva Protocol, a digital-based identity system backed by blockchain. Chris describes it as “an effort to more easily create digital identities.”

How platform leaders can contribute

To platform leaders across disciplines interested in engaging with the topic of social impact, Chris has strong messages.

He calls entrepreneurs to “find a real problem that needs to be solved. There are plenty of those issues that seem to be intractable – homelessness, climate change.”

From policy makers, Chris would like to see regulation that better enables platforms to maximise their impact. In his opinion, “technology can be very powerful in helping people, but at times there are regulations that make it difficult for companies to operate.”

In Kiva’s case, for example, the loans have 0% interest in the United States because if they had any positive interest, then they would be regulated. Kiva is also unable to advertise their platform outside the United States because of limitations with registration. This means that their audience of lenders – and therefore, potential impact for borrowers – is restricted. Policies that are attentive to these barriers could open up possibilities for all kinds of social impact platforms.

And Chris asks academics and researchers to act as the conscience of non-profit platforms:
“Keep us honest. Make sure that we’re creating the impact that we want.”

Looking to the future

With today’s rising attention to social justice, the climate crisis, and other shared challenges, Kiva’s impressive story will inspire many entrepreneurs to follow their example. Their meaningful success in the past 15 years is certainly just the beginning.

This keynote with Chris Tsakalakis was part of the Platform Leaders event organised by Launchworks & Co on the 24th of November 2021 (full list of speakers and agenda). To watch the full event, play the video below.

The Platform Leaders initiative has been launched by Launchworks & Co to help unlock the power of communities and networks for the benefit of all. All Launchworks & Co experts live and breathe digital platforms and digital ecosystems. Some of their insights have been captured in best-selling book Platform Strategy, available in English, French and Japanese.

The Platform Leaders initiative has been launched by Launchworks & Co to help unlock the power of communities and networks for the benefit of all. All Launchworks & Co experts live and breathe digital platforms and digital ecosystems. Some of their insights have been captured in best-selling book Platform Strategy, available in English, French and Japanese.